4 Reasons Netflix (Qwikster) and the USPS Need Each Other

4 Reasons Netflix (Qwikster) and the USPS Need Each Other 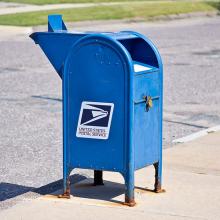 The adjective most often used to describe the USPS these days is "beleaguered." Meanwhile, Netflix has managed to outrage the entirety of America's privileged class by splitting up its services into streaming-only (Netflix) and DVDs-by-mail-only (Qwikster). They're like two exhausted boxers: the only thing keeping either one on their feet is their mutually staggering, sweaty grapple.
1. It's the only thing that keeps people checking their PO boxes regularly
If I didn't have DVDs showing up in my mailbox at least once a week, I'd never check my mail. It's not like there's anything else useful in there. Aside from those crimson envelopes, the contents of my mailbox consist of 1) junk mail and 2) paper statements for bills I always pay online.
2. Who else sends mail?
Qwikster has to be one of the USPS's biggest customers. The USPS could keep jacking up their rates to squeeze Qwikster for more money, but every time they do, Qwikster's going to lose customers.
Eventually the USPS will kill that golden goose, and where will that leave them? As the primary distribution method for pleas to switch auto insurance companies, if my own mail stream is any indication.
3. What's Qwikster going to do, deliver DVDs by specially trained budgies?
Actually, that would be awesome. I would be one of the first people in line to buy a combination seed bell/budgie perch/DVD receptacle. Heck, I would even spring for the optional clip-on cuttlebone.
More seriously, this is probably a big factor in Netflix's decision to spin off Qwikster as a separate service. When your whole entire business model is hostage to the whims of one of the country's largest government agencies, you're on shaky ground.
4. Qwikster is the USPS's Elmo, and the USPS knows it
Every time people start sharpening their budgetary knives and eyeing public television, PBS trots out the cast of Sesame Street. No one wants to be the person who let Big Bird die on their watch. Sesame Street is PBS's killer app, their charismatic megafauna. So it is with DVD delivery and the USPS.
When the USPS threatened to cancel Saturday delivery to reduce costs, millions of Qwikster users immediately ran through their mental shipping schedule trying to figure out how they would have to work around it. If I mail out my DVDs on Tuesday morning they'll be received on Wednesday, replacements would ship on Thursday and get here Friday…
< Previous post:

We Support
Climate Activism
Click to reach the League of Conservation Voters.
Conversation Processing Intelligence™ beta website!
Click here to visit the hub of the Klat Network.
This site is part of the Klat network of blogs, forums, and communities.

Ghostbusters 2016: What Did You Think?

Netflix slowly climbing back to the top

Netflix Streaming: Not what it's cracked up to be

Netflix Streaming: Peeking Over the Fence

Netflix: One Month FREE Plus $10 Rebate

DVD-Only Plans Are Back

Oh Netflix, You Know We Can't Quit You